On Jan. 30, 18 members of Scripps PRSSA braved snowy and icy road conditions and travelled to Cleveland, OH for the opportunity to tour and network with four public relations companies: PR 20/20, The Adcom Group, PR Newswire and Global Prairie. All four have Bobcats working for them who were able to give us background information, advice and insights into the PR world and their particular agency.

The first stop on the trip was PR 20/20, an inbound marketing agency with a whole lot of Bobcat love! (and a couple Bobcat imposters, too..)

All the thank you’s to @pr2020 for making us feel at home, even if you had a few OU imposters #ScrippsPRSSAtoCLE pic.twitter.com/SEG9oL4JiC

After meeting the staff and touring the office, which features an awesome view of Progressive Field, we split up into small groups to learn more about how PR 20/20 serves its clients. 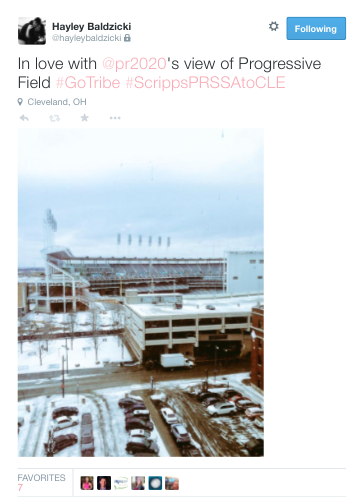 PR 20/20 consultants focus on what they can do to best serve their clients’ needs, rather than focusing on their own agenda. They are a certified Hubspot agency, a software that they use for their clients’ inbound marketing needs.

Thanks so much for having us, @pr2020! Ioved hearing more about @HubSpot and how you use it! #ScrippsPRSSAtoCLE — Jess Carnprobst (@jess_carnprobst) January 30, 2015

After PR 20/20, the next stop was The Adcom Group, a full-service communications agency that can provide their clients with anything from social media and traditional PR to TV commercials and graphic design.

Their approach, known as the Modern Communications Model, centers around the client, and from there focuses on their specific needs.

We also heard from different departments, including an account executive, a creative team member, and Adcom’s social media guru, before learning about the tech, SEO, and analytics side from Bobcat Nicole Germano. Afterwards, we toured the two-story office, which included a studio, theater, and countless Cleveland sports pictures.

The last stop of the day split the group into two: half journeyed to PR Newswire, while the other half visited Global Prairie. Global Prairie is a full-service digital marketing and advertising agency, with six offices nationwide and a few awesome Bobcats in its Cleveland location.

Had such a great time with my @globalprairie fam. Thank you for sharing the afternoon with us! #ScrippsPRSSAtoCLE pic.twitter.com/hzqk4TuUtP — Allison Evans (@Allison__Evans) January 30, 2015

Global Prairie’s approach centers on promoting the well being of its employees and its clients. 10% of the agency’s revenues go to charities of its employees’ choice, and yoga classes and other healthy lifestyle workshops are common. This attitude also carries over to Global Prairie’s clients, who are healthcare and non-profit companies for the most part, and the work the agency does for them.

Overall, it was a great day of networking with fellow Bobcats, exploring downtown Cleveland, and bonding with Scripps PRSSA members.

Had so much fun visiting @pr2020 @TheAdcomGroup & @PRNewswire with some of my fav girls ❤️ #ScrippsPRSSAtoCLE pic.twitter.com/iZvmRK7ZJo

Big TY to @pr2020 @globalprairie @TheAdcomGroup & @PRNewswire for having us today! We had so much fun & learned even more #ScrippsPRSSAtoCLE

If you missed out on the #ScrippsPRSSAtoCLE action, don’t worry! #ScrippsPRSSAtoCHI is happening at the end of March, so stay tuned for more information and a chance to network with PR pros in the Windy City. 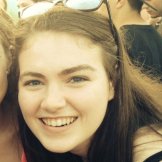 Allison is a sophomore majoring in strategic communication and minoring in sports management and marketing. She is also completing a social media certificate. After graduation, her dream job is to work in sports PR. Follow her on Twitter at @allisonzullo!