Everywhere you look you see the combinations of red, white and blue. The boom and crackling of fireworks, ringing in your ears, and you smell the different foods of the season. Welcome to fourth of July weekend. 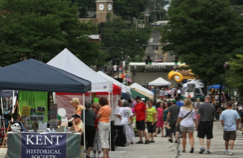 July fourth brings excitement to many for several different reasons.

Some people look forward to Fourth of July weekend to drink and have a good time. Being one of the biggest drinking weekends of the year, many alcohol brands plan ahead to come up with an eye catching advertisements and social media posts in order to garner attention during this patriotic weekend.

Some people love the weekend for the sales that are all around the country. Many stores including American Eagle, Kate Spade, Best Buy, and Lowes prep for the craziness that comes with working on July Fourth weekend. With people pouring in and out of stores while celebrating America’s Independence with a new pair of shoes or a new purse, the extreme mark down sales brings Americans in every year.

Along with the Fourth of July sales comes Fourth of July decorations. Throughout the summer everywhere you turn, especially with the country music in its peak season, you will see lots of stars and stripes, especially on instagram. Retail stores around the country are constantly getting in new apparel to represent our country from shoes to crazy pants to fun accessories. Fourth of July will always be a proud time of year for Americans across the country to express their pride in being an American by wearing their flag proudly! Just because July Fourth has passed, doesn’t mean the fun has to end. Go out and wear your stars and stripes with pride, and have some fun in the sun. I know I am still reppin’ my patriotic attire!

Rosie Haren is a Junior studying Strategic Communications with a minor in Marketing and a Social Media Certificate. After graduation she would like to work at a small PR agency and eventually go to Grad School. Follow her on twitter @rosieharen!