Being a Clevelander it’s only right for me to write this blog about the NBA finals—even though I may end up in tears.

In Game 6, the Golden State Warriors defeated the Cleveland Cavaliers becoming the 2015 NBA Champs. While Golden State celebrated, Cleveland was disappointed…again. Championship series are always good opportunities for PR. Here are 5 PR statements I saw throughout the NBA Finals:

This hashtag/slogan was used on social media by Cleveland Cavs, the players, and the fans. #ALLIN was a perfect PR move for the City of Cleveland as it depicted, so perfectly, the energy of Cleveland fans during the NBA finals.

From Ohio to California, it was no surprise this NBA Finals was looked at as a “East side vs. West side” series. In Public Relations, you have to keep rivalries and how the image will be portrayed to the public, on your mind. Different sides of the country are diverse socially, culturally, etc. It’s best to write stories, create hashtags/slogans, etc. that will resonate with both sides instead of creating a bigger riff.

Two of the best basketball players in the NBA; Both from Akron, Ohio, they were even born in the same hospital. Broadcasters really stressed how this series was a once in a lifetime type series. Stressing the coincidental similarities between these two players makes the series more interesting and historical to the audience. Showcasing the simmilarities and differnces in star players can draw attention to crowds who normally wouldn’t focus on the individual players.

If you watched any of the post conferences, you probably saw Steph Curry’s  3-year-old daughter, Riley Curry. She was full of spunk and sass a she tried to steal the spot light from her MVP dad. However, where some found this heartwarming & cute, others found it unprofessional. It just proves you have to always be careful if you are in the public’s eye—someone will always criticize you. However, I believe this was good PR for Steph Curry as it showed he is a family man off the court, and more than just a basketball player.

Of course we expected Steph Curry & Lebron James to do all the work. However, that was not the case at all. Golden State players Draymond Green, and Andre Iguodala stepped up their game just as much as Cavs players Timofey Mozgov and Matthew Dellavedova.  This also holds true within the business. PR agencies all have their “superstars” However, to reach a goal with a client, there are many times you will have to work as a team to be successful and elevate the company as a whole. 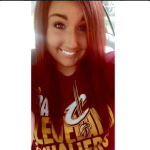 Hayley is a senior studying Communication Studies specializing in Organizational Communication & Health Communication with a minor in Journalism. Post graduation she’d love to work in sports, health, or entertainment. Follow her on @hayleybaldzicki