In the wee hours of the morning on Friday, October 21, eighteen of Scripps PRSSA’s best and brightest knocked back some coffee, loaded too much luggage into four small cars and took off into the rain toward Indianapolis. For this one weekend only, Indianapolis was the Mecca of college public relations, also known as PRSSA National Conference.

The day started with a few career tours from some incredible companies like Visit Indy, Hirons and the NCAA. Throughout these tours students were able to see the workplaces and hear a rundown of each company’s PR operations.

We then settled into our fancy hotel/conference space, which also happened to have views like these from the rooms: 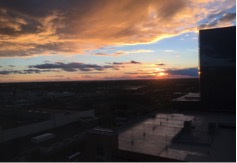 As it turns out, Indianapolis is way cooler than you’d think. More on that in a bit.

Our first real session of the weekend was on chapter development and featured none other than Gentry Bennett, Austin Ambrose, Annie Robinson and Alyssa Murtagh, four of our own! Our chapter was given the amazing opportunity to present on the unity between PRSSA chapters and student-run firms, and these PRos knocked their “Two Halves of a Whole” presentation out of the park.

Later in the day we were able to have our resumes critiqued by professionals who offered great advice. A few popular tips were:

Our first day of conference came to a close with “The PRSSA 500” Opening Night Celebration, which was beyond fun and can only be described as lit. Food, music, and dancing were all provided with plenty of good cheer, and we saw that networking with our fellow aspiring professionals was actually loud, crazy and entertaining, not awkward or tedious.

Nighttime in Indy was for exploring the city, and each night we were all majorly impressed by just how beautiful it was. Skywalks, a cultural trail, tons of unique landmarks and delicious food tied it all together to make Indianapolis a truly fascinating place to be.

Days two and three of National Conference were where we really got into the nitty gritty of learning, networking and getting inspired. But before any of that professional stuff could happen, we had to do role call, which Scripps PRSSA prides itself on mastering. After the morning keynote address and awards, a role call is performed where each school can do a little cheer to show people who they are and what they’re all about. We, however, prefer a big cheer, with elements that showed that we’re all about Twitter, coffee, Hannah Montana and being louder than anyone else.

Saturday and Sunday included speakers that made us laugh, made us cry and made us scream when they gave out free goodies (Vera Bradley, we love you).

We learned from speakers who planned Super Bowls, rebranded entire fashion companies and brought thousands of tourists into a city that people don’t get all that excited about. We were taught rules about blogging and press releases, the ins and outs of nonprofit and sports PR and how to plan, pitch and tell a story that captivates an audience. Professionals in and out of the PR world showed us that authenticity, honesty and social responsibility are more important than profits. An astronaut and a refugee turned CEO showed us how we can take little opportunities and run with them, regardless of what we may have faced in the past. The Intern Queen herself gave us tips on landing internships and jobs that may seem out of reach, and Warner Bros. showed us how they promote the stars and shows we love. These are just a few examples of the amazing people and presentations we encountered. One of the best parts was that each of us were able to choose exactly which sessions we wanted to attend. During these two days of accelerated learning, we asked countless questions, met fantastic professional contacts and gave out as many business cards as we possibly could.

Sunday night featured more food and a posh networking event that brought Ohio and Chicago chapters together with professionals from Geben Communication, who, by the way, LOVE Bobcats. 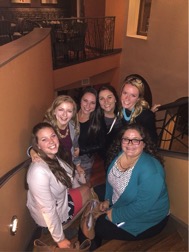 Our last day at National Conference was a bit more relaxed and definitely bittersweet. Monday morning was spent seeing more of the city, especially the gorgeous canal walk, quirky boutiques and restaurants, and the coolest shopping mall ever. 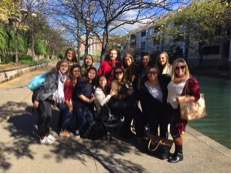 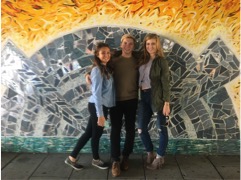 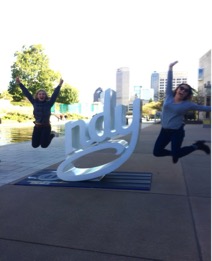 After we’d seen the sights, we returned to the conference for the Career Development Exhibition, where we were able to speak one on one with about a zillion potential employers. The final event of the trip was the “Circle City Celebration” Awards Ceremony and Dinner where we got all dolled up and celebrated a year of incredible accomplishments and a weekend of fun and development.

While reflecting back on the weekend, it’s easy to see why this is such an amazing opportunity. Going to National Conference is such an intensely motivating, inspiring experience. As a first timer, I can say that I’ve never seen anything like it. Sitting in a room with hundreds of other students who are talented, driven and passionate about the same thing as you seems like it would make you nervous or insecure. In reality, it empowers you to want to meet them all, learn from each other and motivate one another to do the best work possible. Hearing speakers that have done things you’ve only dreamt of doing say that they too were just kids in PRSSA reassures you that even though you might feel like you’re clueless, inexperienced or behind, you have so much ahead of you. Every single person there wants to help you in some way or another, and that creates a sense of community that transcends the differences we all have in age, location and experience.

I encourage everyone in PRSSA to go to National Conference at least once. It is truly a life-changing weekend. The things you’ll learn there far exceed the field of public relations. You leave with knowledge about responsibility, relationships, courage and being adventurous that will improve your life even outside of your career. And, if you take nothing else away from it, you still get a weekend of travel, fun and bonding with an incredible group of people who will become fast friends and lifelong supporters. PRSSA is something we’re all extremely lucky to be a part of, so taking advantage of these resources and experiences is really what it’s all about. I’m extraordinarily glad that Scripps PRSSA had such a terrific time in Indianapolis, and I hope to see you all at National Conference next year in BOSTON! 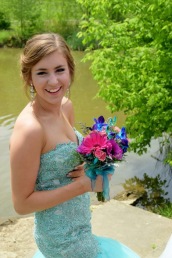