Gone are the days of receiving your J-14 or Tiger Beat magazine to learn more about the Jonas Brothers so you could flex on your friends’ lack of pop culture knowledge at recess. Now, we have social media.

Rumors surfaced that the Jo Bros were reuniting after six years of being broken up when they blacked out all of their social media platforms. 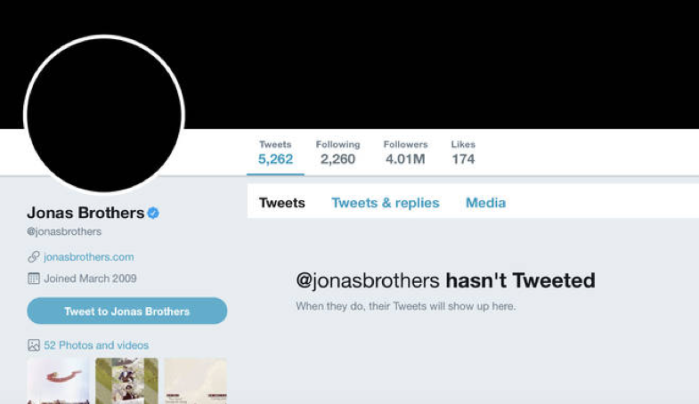 Nick Jonas hinted at the speculations by liking tweets that insinuated a collaboration between the three of them.

Hours later, we were hit with the news that their new single titled “Sucker” would be released at midnight. Right when we thought the hype couldn’t get any more insane, James Corden announced through his social media channels that he would have a “Jonas Brothers Week” in honor of their graceful return to the spotlight.

The Jonas Brothers even recreated their classic “How The Tables Have Turned” video for their loyal fans.

Knowing that the Jonas Brothers are back together is single-handedly establishing world peace. Fans flocked to social media to express how the Jonas Brothers reuniting is a monumental point in American history. Even our favorite Scripps PRSSA President got in on the action!

A couple days ago, we had no idea that the Jonas Brothers were even considering getting back together, let alone releasing a single this week. It just goes to show how the power of social media can be used for good. Garnering hundreds of thousands of impressions, the Jonas Brothers strategically sparked joy back into our lives.

We are excited to see what other surprises our boys have in store for us. A full album? A tour? Who knows! Until then, check out their new single “Sucker” here.

Emily O’Flynn is a senior journalism – strategic communication major and current VP of External Relations for Scripps PRSSA. You can keep with her on Twitter @O’Flynn_Emily