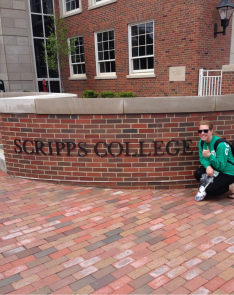 I have a strong belief that no one understands Ohio University until they come here. I too was once someone that wrote off OU as a backup school, and only applied here as such. Little did I know, four months after receiving my acceptance letter to the E.W. Scripps School of Journalism, I would venture to Athens for the first time and fall head over heels in love.

The campus is gorgeous, the alumni are stellar and the opportunities OU offers are second to none. I knew the journalism school would be competitive and challenging, and that’s exactly what I wanted out of my time in college.

What I didn’t want, however, was to not feel at home. On tours, at orientation and again at move-in, the Class of 2017 was told to get involved in order to make the most of our college experience. At the involvement fair I signed up for everything that had anything to do with the wild world of PR I would soon find myself in.

During the first week of classes, I met everyone in my learning community and found two other strat comm majors. After deciding to attend the first PRSSA meeting together, three fearless freshmen walked in to Scripps Hall 111 side by side. From then on, it became a tradition. Every speaker “aww’ed” at the fact we were freshman and commended us on becomi

Beyond PRSSA and the amazing connections I’ve made through it, I also decided to join ImPRessions, our student-run PR firm. After submitting my application I figured I wouldn’t get a position as a freshman- but I got an email later that week stating that I made it on to the College Book Store account, my top choice!

The people I’ve met and the experience I’ve had couldn’t be matched anywhere else. Ohio University has truly proved itself to me, and I hope that everyone gets to see this side of Athens. More than just a small town, it’s a community of Bobcats willing to help each other and grow together.

After learning a lot about not only myself, but also about my career goals, I look forward to sophomore year for more of everything; especially spending my Monday nights with Scripps PRSSA, the people that have helped make Athens my home– now and forever.

One thought on “My Freshman Year Experience: Gentry Bennett”