A major trend in social media today is staying relevant. Every day, social media sites are buzzing about hot new trending topics. Over time, companies have observed what their consumers have been talking about and they have decided to join the conversation. Companies now realize that in order for their voice and brand to be heard they must incorporate themselves within trending topics.

One of the best examples of this comes from the company, Arby’s. During the 2014 Grammy Awards Arby’s noticed Pharrell Williams’ hat was very similar to the Arby’s iconic Stetson logo. They then seized the opportunity to insert the brand Arby’s into the pop-culture world, by tweeting @Pharrell.

On October 21st, 2015, the day Marty McFly traveled back to the future, #BackToTheFuture became a trending Hashtag on Twitter. Numerous companies saw this and joined in the conversation while incorporating their brand into the trending topic and hashtag. 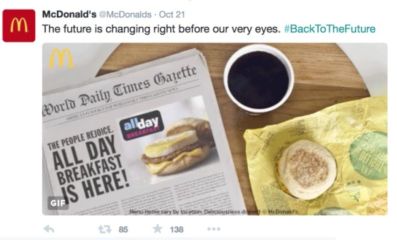 Another example is on October 27th, 2014 Taylor Swift released her album 1989. So now a year later the Hashtag #HappyBirthday1989 took to Twitter… 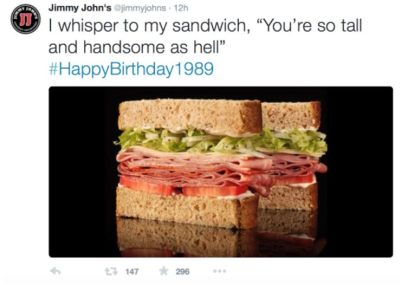 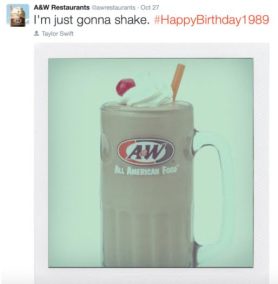 A new trend in relevancy is brought to you by Taco Bell, one of my favorite companies on social media. Taco Bell currently launched their #TacoEmojiEngine to celebrate the new taco emoji that had been added to the emoji keyboard by iOS 9.1. Taco Bell had been petitioning for this the “taco emoji” since November 2014. How does it work? Twitter users simply tweet @TacoBell with the taco emoji and any emoji of their choosing and the #TacoEmojiEngine generates a mashup of the two emojis in a photo or GIF. Taco Bell’s engagement and following has spiked due to their ability to stay relevant with the reveal of the iOS 9.1 emojis.

Consumer engagement has been a main strategy that many companies have adopted through their social media accounts. It is still very important to engage directly with your consumers through mentions and comments, but new strategies have shown us the importance of engaging indirectly with your consumers. Indirect engagement can be achieved by incorporating your brand or company into trending topics. This type of engagement is likely to have more impressions and show that your brand is relevant, which is extremely important in today’s world of social media.