I, along with the majority of my friends, peers and even Journalism professors, are self-proclaimed “social media junkies.” Whether we like it or not, we’re addicts. We’re addicted to pop culture, the latest-and-greatest trends, keeping up with the world’s conversation and connecting and sharing with just about everyone. While I have 1,503 friends on Facebook and around 350 Twitter followers, I couldn’t tell you who half (or more) of those people are. Yet, their wedding, vacation and family reunion photos bombard my timeline like we’re the best of pals. So…how do we sort through the clutter? Do we just delete all of our Facebook “friends” or find another solution?

In 2014, Twitter’s CFO announced that the platform was seeking to adopt a new Facebook-style filtered feed. Facebook uses an algorithm that picks and chooses which statuses and pictures appear at the top of your news 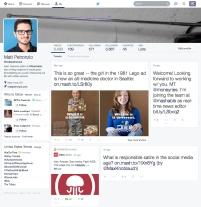 feed, based on your interests and preferences. They have adapted these changes in light of pressure to increase its number of users after not living up to projected performance. The platform has added a “memories” feed, which offers users tweets of popular and prominent material. Additionally, they have added a “recap” feature to serve as a filter in which users can see tweets that they have missed throughout the day. Although not new, Twitter also has lists, which is a curated group of users. Users can subscribe to lists and select to view tweets from those users only.

This year, Facebook has taken several steps to give users tight control over their newsfeeds. In January, the site introduced an algorithm to reduce the amount of false and misleading news posts. In March, they updated how “likes” are measured by removing “likes” from deactivated accounts. In April, they updated the news feed to ensure that content from your close friends appears first. Finally, this summer, the site allowed users to follow and unfollow certain people and content and prioritize what they see first.

According to Greg Marra, a product manager for News Feed, Facebook wants “to give people controls that we simple and easy to use but have a powerful impact on their News Feed.” While Facebook and Twitter aim for customization and personalization on their platforms, is this enough? Are the tools too complicated? I’m hopeful that Facebook & Twitter will continue to find better, more efficient ways to sift through content and turn down the noise on their sites.

Morgan is a Senior studying Strategic Communications with a minor in Marketing and Specialization: Retail Merchandising and Fashion Product Development. Follow her on Twitter @morganborer!