Cincinnati’s sweetheart, Fiona the Hippo, has gained prominent exposure on multiple social media platforms for the Cincinnati Zoo & Botanical Gardens.  But, how did she get to where she is today?

Fiona was born prematurely on Jan. 24, 2017, weighing in at 29 pounds. This is relatively small considering an average baby hippo weighs between 55 and 120 pounds. Most of the content posted about Fiona consists of major weight milestones because of her preemie status earlier this year.

Hippo Cove’s beloved mammal rakes in more impressions than any other baby animal at the zoo. Not only does Fiona’s story resonate with the thousands of people who visit the 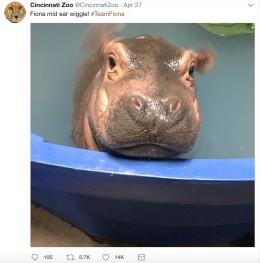 Cincinnati Zoo & Botanical Gardens to see her, but it also shows how influential social media and effective storytelling can benefit a business. Her digital presence gives her online audience the feeling that they already know her so intimately, they are persuaded to visit the zoo as if to see an old friend

“It sounds like you’re at some sort of rock concert where some major celebrity has finally stepped on the stage,” said Wendy Rice, head keeper Africa at the Cincinnati Zoo & Botanical Gardens. It’s like she’ll peak her head out and you can tell the exact moment when the public has a line of sight to see her because it’s just an eruption of cheering and some people literally cry.”

Now Fiona has her own show, which is streamed through Facebook. The Cincinnati Zoo’s director is writing a children’s book about her entitled Saving Fiona. Graeter’s ice cream even named a limited-edition flavor of ice cream “Chunky Chunky Hippo” after the plump personality.

If you want to be on #TeamFiona after reading this post, please connect with Cincinnati Zoo & Botanical Gardens on their respected channels:

This analysis of Fiona the Hippo was brought to you by Emily O’Flynn. Emily is a junior strategic communication major and our very own VP of Social Affairs. Follow her on Twitter @OFlynn_Emily.