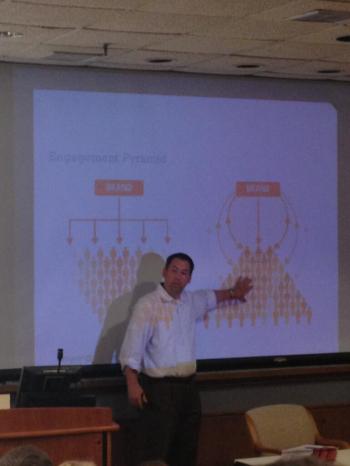 The first Scripps PRSSA meeting of the 2013-2014 school year was a huge success! With more than 93 people jam-packed into Scripps 111, the room was abuzz with positive energy and a particular PR excitement only known to us special Scripps kids.

As a reminder, sign-ups have begun for the Social Affairs Committee, the PR and Social Media Committee, the International Education Week Committee, the Mentor/Mentee program and PR Bootcamp. If you are still interested, be sure to add your name to the list at next week’s meeting!

As tradition would have it, Aaron Brown from Fahlgren Mortine Public Relations kicked off the year as our first speaker. You can read more about Aaron here:

Aaron opened the meeting by asking for the definition of PR. Almost immediately, about 17 different words were called out. “Promotion,” “story-telling” and “insanity” were among them. And yes, while PR does include all of those things, Aaron said, it’s also about so much more.

Aaron explained the three different types of media that dominate today’s PR world: paid media, earned media and owned media. While all three are and always will be important, earned and owned are beginning to dominate the field.

“92% of consumers around the world say they trust earned media – such as (brand) recommendations from friends and family – more than anything else,” said Aaron. “We need to stop thinking about mass communication and focus on individual engagement.”

In addition to current media trends, Aaron talked about the importance of Scripps PRSSA to his current career.

“I am at Fahlgren Mortine because of Scripps PRSSA,” he said. “The meetings I went to and the relationships I formed while in college are the reasons why I got my job.”

To learn more about Fahlgren Mortine Public Relations, check out their awesome website.

On behalf of the entire Scripps PRSSA executive board, we can’t wait to see you all in Scripps 111 at 6 p.m. next Monday! 🙂