Everyone tunes into the Super Bowl for different reasons. Some are there for the main event, the game itself, while others care for the halftime show. Aspiring public relations professionals? We’re definitely watching for the ads. Here are the best five ads of Super Bowl LII.

This ad featured people around the world drinking Coca-Cola. While this ad may not have been the most exciting of the night, the message is a winner. “The Wonder of Us” celebrates diversity and gender neutral people with the opening line, “for he, and she, and her, and me, and them.”

Was I the only one smiling throughout this entire ad? This ad featured Eli Manning and Giants teammate Odell Beckham Jr. celebrating a touchdown during practice. Complete with the famous Dirty Dancing lift, this ad connected the feeling of fun back to the NFL. (My favorite NFL moment of the night for sure.)

Similar to Coca-Cola, Budweiser was trying to send a more important message with their commercial. They highlighted their part in disaster relief: not beer, but water. I had no prior knowledge of their contribution and think they tastefully highlighted their role.

One of the most tweeted about brands of the night was Tide with their unusual way of telling viewers that their commercials were indeed a Tide ad. I agree the ads were both clever, entertaining and memorable all at the same time. 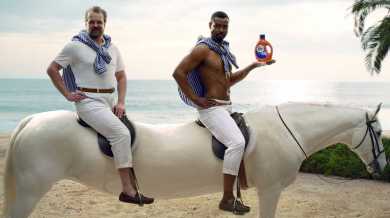 Amazon’s commercial for its digital assistant, Alexa, featured Gordon Ramsay, Cardi B, Rebel Wilson, Anthony Hopkins and even CEO Jeff Bezos. This ad takes first in my book for being entertaining and showing off a key feature of its famous product. While the commercial is comical, can you imagine Alexa’s voice being replaced by Cardi B?

Natalie Butko is a junior strategic communication major and our VP of Visual Communication. Give her a shout out on Twitter @chatty_natty.